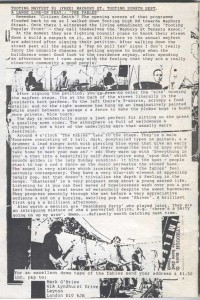 At the turn of the 1990s I was living in the South West London district of Tooting on a street which contained a row of housing association houses/ flats now sadly demolished to make way for a car park. Every summer, the adjoining gardens of the residents made way for a stage and a day of music, booze and general good-mannered mayhem known as Maybury Fest (and subsequently Longley Fest).
Like the Field Farm Festival, this was a fantastic event that ran on community goodwill and enthusiasm. The police would usually show up and stick their heads round but cheers to ’em, they never intervened.
I have particularly fond memories of the Maybury Fest as I made my debut musical performance there playing a mix of Stones, Velvet Underground and Doors numbers in a combo tragically (but also brilliantly) named, The Velvet Underpants. The following year I returned as guitarist with The Fables (see review right), making their live debut. 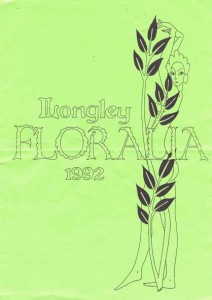 The day would always be a real event with the finest local musical talent including Brilliant Pink, Abstract Joy, Kick Asteroid, Death Bang Party and on one occasion The Kitchens Of Distinction whose set included fantastic versions of Joy Division’s “Dead Souls” and Bowie’s “Heroes”. Their frontman, Patrick was Maybury Street’s most famous resident as reflected by KoD’s later album track “On Tooting Broadway Station”.

Being a compulsive hoarder, it didn’t take me long to dig out the programme from the 1992 Longley Fest (see left). There used to be a great website dedicated to the history of Maybury Fest but it seems to have disappeared. If , by chance, the curator of that site stumbles upon this page – get it back up! Also, anyone who has any videos of the event (I know for a fact 1990 and 91 were filmed) please get ’em on Youtube.

One Response to “Memory of a free festival”